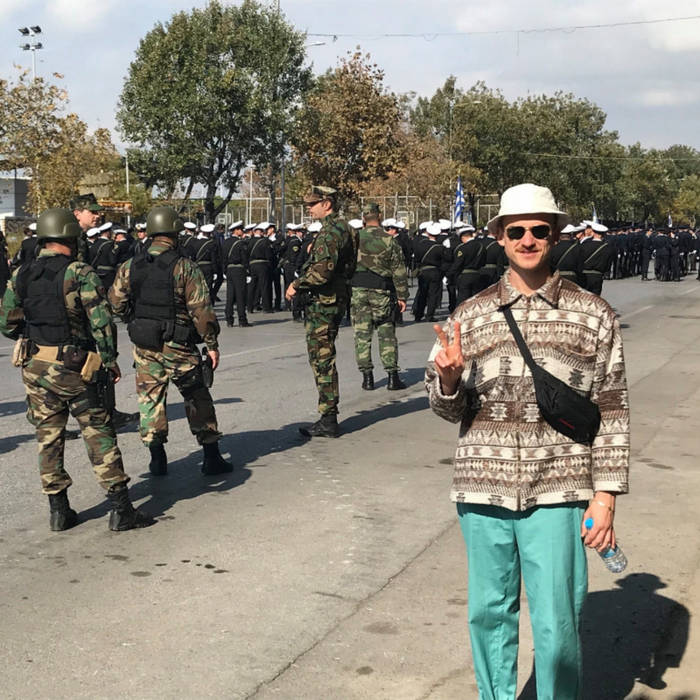 The third studio album "Urban Dangerous" by the Garage-Rock Trio pushes the doors further open into the world of timeless pop. The characteristic features like the rolling bass, or the 90's high school rock vocals are still present, but a playground of skits and sound experiments are opened up. The songwriting seems more mature, the riffs more cheeky, and the fun factor more balanced, so that the individual songs are amplified by the overall "hit" factor.

"Urban Dangerous" radiates an energy that increases the mood barometer considerably and can also be enjoyed in all kinds of situations. The R-O-C-K factor plays a big role whether packed in a western look, driving psychedelic blues or with classic indie punk attitude, the Wolf Mountains give the genre the esprit it desperately needs in 2019.

Actually, the existence of this band is now based on a solid lie: that the Wolf Mountains are still living in Stuttgart, Germany among car manufacturers and architects; in the midst of medium-sized precision engineering factories and tunnel construction projects. The rock trio currently thinks their music is more cosmopolitan, from the perspective of a cosmopolitan rock-and-roll “no-good”: "Urban Dangerous". In the meantime, they have outgrown their hometown in two ways.

On the one hand only Reinhold L. Emerson, guitarist and singer of the Wolf Mountains, lives between Senke and the Stuttgart Hills. Kevin Kuhn (drums and vocals) and Thomas Zehnle (bass) moved to Berlin, under the roof of a flat-sharing community. On the other hand, the sound of the Mountains has changed a lot since their debut album "Birthday Songs For Paul", this teasing, orderly chaos.

While the will for more of a “pop song” sound began to flash under the thick layer of distortion in the 2017 release of their successor "Superheavvy", the Wolf Mountains are consistently continuing this on their newly released, third album. Of course, “Urban Dangerous" doesn't deny the roots of the band: their Lo-Fi sound in the Swabian underground, but thinks of them - more openly, on the open-air stage, not confined in their garage; an international phenomenon, “Stuttgart” verging “worldwide”.

Now was the time to develop a healthy sensibility for what Rolling Stone Magazine celebrated as "preventing, shot up pop music". Clearly what served as the founding impulse of the band, from 60s garage rock to noise rock, still sets the direction. But on "Urban Dangerous" the search for melody, for pleasant stickyness plays a bigger role.

That's what you get out of the record from the first moment on: The opener "Listen To The Woods" develops a powerful pull with a stomping beat and a fairground organ-like guitar, which won't let you go for the following thirty minutes. Then follows "I Wanna Be Asleep", which, starting from a fat riff, turns into a sophisticated psych-rock number, a sound you’d usually hear from the band Tame Impala.

The Wolf Mountains are enormously changeable on "Urban Dangerous". Anything else would somehow be too much of an understatement. All three members have been playing for years in a variety of different bands (including Die Nerven, Levin Goes Lightly, All Diese Gewalt, Karies and Mosquito Ego) and show an extreme wealth of experience.

When you hear the band's preferences for Hüsker Dü in "Out From The Dark", a driving track with motoric beat and warm guitar parts, you feel like you're in the strange fog of an Oh Sees show with the following "Walrus". "Feelings Feelings" finally decelerates the album, gently celebrating the non virtuous, slacker pop of a Courtney Barnett.

In retrospect, it seems like a self-fulfilling prophecy that "Urban Dangerous", the most catchy album of the band to date, was recorded in the studio of Marcel Römer, drummer of the band Juli. Together with Max Rieger (among others producer of Drangsal and Ilgen-Nur) the Wolf Mountains recorded the core of the album there within a few days, Ralv Millberg took over the mastering afterwards.

As befits the Mountains, however, vocal recordings followed in the shared flat of Kuhn/Zehnle. After all, you still need a taste of bedroom rock, even if it’s with panorama windows to the outside, where the big ones sit and where you can, of course, look from time to time.